Around 70 Nottingham business leaders were given an exclusive opportunity to hear from some of the key figures who have been involved with the organisation of the upcoming Cricket World Cup coming to Nottingham, and even see the official tournament trophy at the recent Nottingham Partners business breakfast at Trent Bridge Cricket Stadium on Tuesday 23 April.

There was excitement in the air as Nottingham’s business leaders heard about the city’s ongoing preparations for the Cricket World Cup and the benefits it will bring to the local economy. Attendees enthusiastically took advantage of the chance to get a once-in-a-lifetime photo opportunity with the coveted trophy. 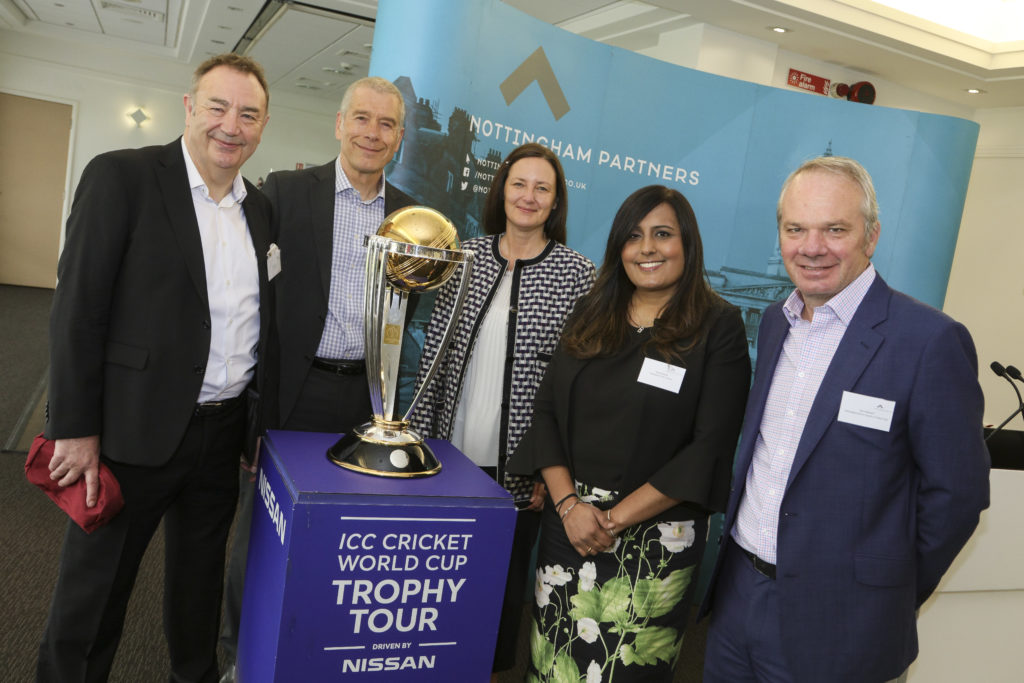 The event began with networking over breakfast pastries, before Paul Southby, Chair of Marketing NG, welcomed guests to the venue. He gave an overview of the Cricket World Cup Trophy Tour and spoke about some of the work that Nottingham City Council, Marketing NG and local businesses have been doing to prepare for this major sporting event before handing over to guest speaker Ruby Bhattal, Head of Communications and Marketing at Nottingham City Council.

Ruby spoke about the importance and value of sporting events such as the Cricket World Cup. Nottingham will be “flooded with thousands of visitors”, she explained, providing an unrivalled opportunity for the city to “put on a fantastic show” for them. She praised the tireless work that has been done so far by key players in the city, including Marketing NG, such as creating a 30-second vignette for global TV broadcast to promote Nottingham as a top visitor destination, organising the city dressing, marketing and PR activity and more. Ruby also talked about the Cricket World Cup Fan Zone. Opening in Old Market Square on 30 May, it will be the largest of all the cities. 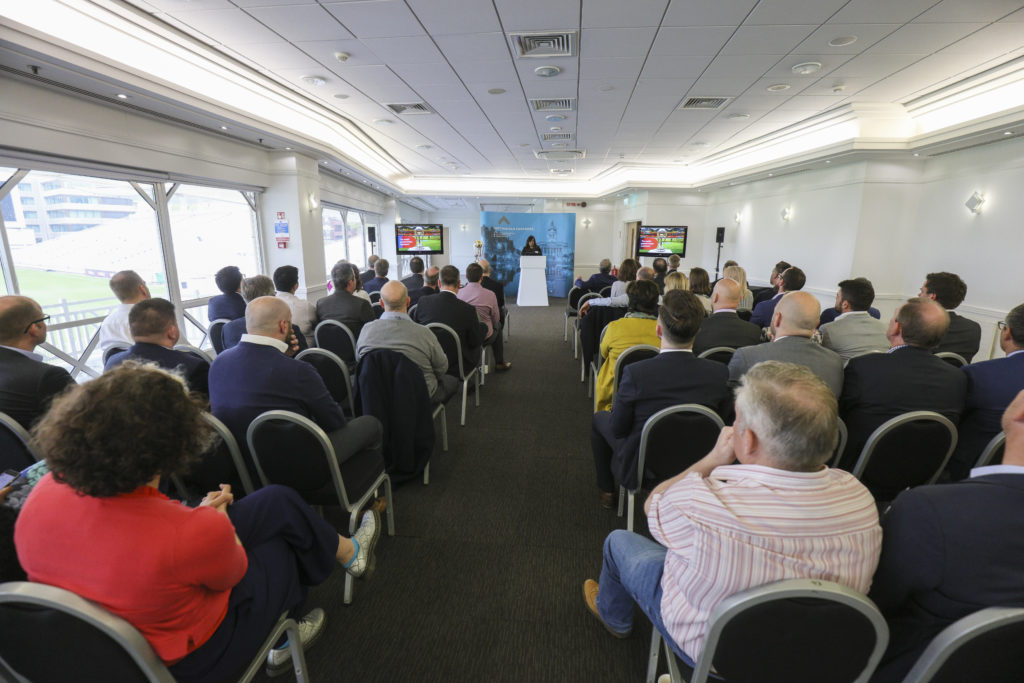 She described the “strong economic case for sport”, explaining that the city GVA will benefit from an additional £18.7 million, and expressed the importance of working together to maximise the economic impact of these events. The exemplary collaboration between various organisations in Nottingham has already been praised by the Cricket World Cup organisers.

Ruby finished by showing the Cricket World Cup vignette, which will be broadcast during each match to an estimated audience of 1.5bn people globally per match – before handing over to Lisa Pursehouse, the CEO of Nottinghamshire County Cricket Club.

Lisa gave a short introduction to the background and the identity of the club before offering further insight into the benefits of major sporting events such as the Cricket World Cup – not just for Nottinghamshire County Cricket Club, but for the region as a whole.

Such events, she explained, are “critical to the future prosperity of the club and the local economy”. As the flagship event in One Day cricket, the Cricket World Cup is incredibly valuable for Nottingham. Almost 90,000 people will head to Trent Bridge to watch the fixtures, and around half of those are expected to stay overnight in the city. Billions of people are expected to watch the matches in Nottingham on television, providing an unprecedented opportunity to showcase the city on a global platform.

Lisa finished by speaking about the multi-million-pound development work and projects at the cricket ground, including the new six-floor dining and hospitality space, Six, designed to open up the Trent Bridge experience to new audiences. She also mentioned that there are more exciting projects in the pipeline, before handing over to Mick Newell, the Director of Cricket at Nottinghamshire County Cricket Club. 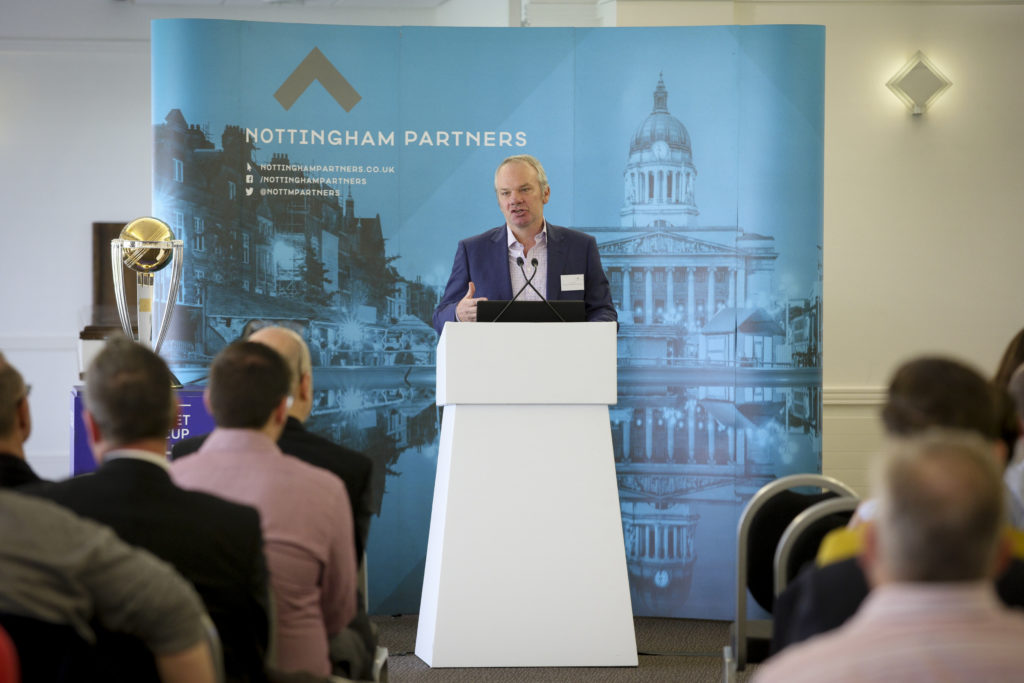 Mick expressed his optimism about England’s chances of winning the Cricket World Cup, generating a buzz of excitement amongst attendees. He described how the team have developed since 2015, learning from their previous mistakes to create an improved sporting strategy for the 2019 Cricket World Cup, which he expects to be successful. Viewers this year can expect to see a more dynamic and fast-paced style based around a very carefully selected squad to maximise England’s chances of winning.

He explained how this is cricket’s chance to become the dominant sport over football during this period, and offered his thoughts on how the city should continue to make the most of this opportunity before handing back to Paul Southby to close the event and invite attendees to take pictures with the trophy. 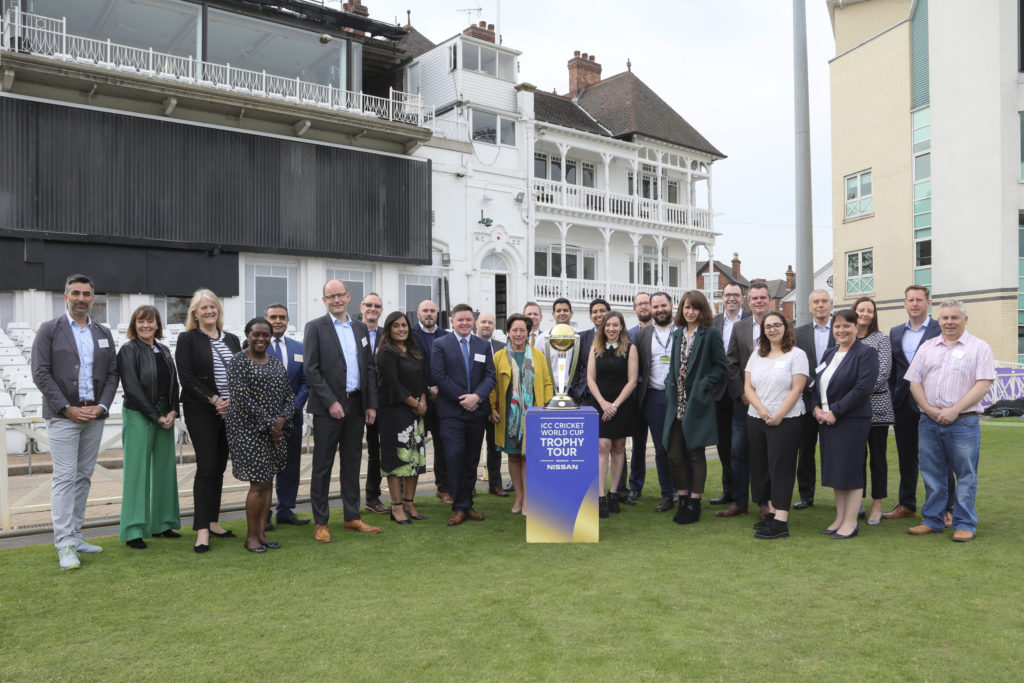 The next event is the Nottingham Partners Members’ Lunch at 12pm on Friday 10th May 2019 hosted at Alea Nottingham. This lunch is themed around ‘The Built Environment and Regeneration’ and is being sponsored by Arup. Please click here to book your place.