Nottingham is set to benefit from an expected £18 million economic boost by hosting five matches as part of the ICC Men’s Cricket World Cup (Thurs 30 May – Sun 14 July), according to analysis from global accountancy firm EY.

The report – conducted on behalf of the England and Wales Cricket Board (ECB) – considered factors including ticket sales; match day spending on food, drink and merchandise; wider spending from international visitors in the hospitality, retail and transport sectors; and the tourism and business legacy from the tournament’s global exposure.

The ICC Men’s Cricket World Cup takes place in England and Wales for the fifth time this summer. The global sporting spotlight will be on Nottingham’s Trent Bridge as it hosts five eagerly awaited fixtures, including England v Pakistan (Mon 3 June 2019).

Thousands of new and existing cricket fans in Nottingham will have the opportunity to get up close to the ICC Men’s Cricket World Cup action as the tournament is brought to life in the iconic Old Market Square, the second largest public space in the UK, from Thurs 30 May – Sun 2 June. Nottingham’s will be the first of the eight city centre fanzones across England and Wales, and will feature live broadcasting of the tournament fixtures, cricket activities, food, music and entertainment, bringing fans closer to the action than ever before and giving them the opportunity to soak up the atmosphere outside of the sell-out matches at Trent Bridge itself.

Nottingham welcomed the ICC Men’s Cricket World Cup Trophy Tour (driven by Nissan) in April at some of the most iconic city locations, including the council house (draped with England’s largest St George’s flag), Trent Bridge and the Robin Hood statue as well as intu Victoria Centre, providing opportunities for the public to get up close to the coveted international prize.

“The impact of the ICC Men’s Cricket World Cup 2019 on Nottingham’s economy should not be underestimated. Around 87,500 people will attend the sell-out matches at Trent Bridge and around 75% of these are expected to be travelling from at least 25 miles away. It’s likely that they will be making use of Nottingham’s hotels, restaurants and visitor attractions during their visit.”

“The flagship fanzone in Old Market Square is one of the ways that we are maximising the economic impact of this event, as it will help to bring more people into the city centre during the matches, boosting the local retail and hospitality sector.” 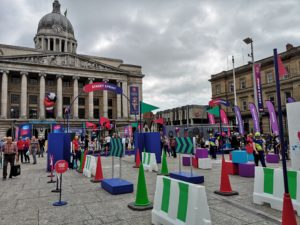 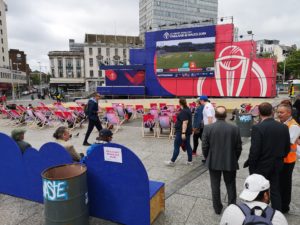 “The Cricket World Cup also provides an invaluable opportunity to showcase Nottingham on the global stage, which we’ll be doing with a 30-second vignette demonstrating what our region has to offer. This will be broadcast to an estimated audience of 1.5bn people per match, and we’re hoping that it will inspire them to consider a visit to Nottingham as well as bringing us to the attention of worldwide investors.”