An Update with Nottingham City Council and an introduction to new CEO, Mel Barrett – Event Recap

We were delighted to welcome Nottingham City Council’s new CEO, Mel Barrett, to our latest online Nottingham Partners event. Our event was Mel’s first public appearance as CEO so we were honoured to introduce him into Nottingham’s business community and offer our members the exclusive chance to ask him questions.

The event, ‘An update with Nottingham City Council’ also saw Chris Henning, Corporate Director of Development and Growth present the City Council’s thoughts on ‘Building a Better Nottingham’ – the key to the City’s economic renewal. The meeting was chaired by Nottingham Partners and Marketing Nottingham Chairman, Paul Southby and Robert Dixon, Interim CEO of Marketing Nottingham, who gave a talk on the progress they have been making since lockdown and their plans. 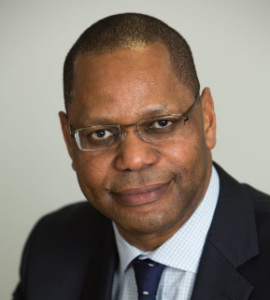 In Mel’s first introduction to Nottingham’s business community, he described our city by saying:

“I think Nottingham is a wonderful city. It’s wonderfully vibrant, diverse, exciting with that rebellious spirit.”

Mel has nearly 25 years of experience in economic and property development. He is a Chartered Surveyor by training who has been involved in major joint ventures in London and on the outskirts of London (his last role was head of Basingstoke and Deane Borough Council). Just before starting at Nottingham, he concluded a £1.4bn joint venture, funded by the Welcome Trust with developer Urban and Civic for the first phase of a 10,000 home and garden community near Basingstoke which will be £3bn ultimately.

The new CEO went on to talk about his beliefs regarding the regeneration of cities:

“It’s not just about infrastructure, and bricks and mortar for its own purpose, I firmly believe the job is only done when local people are benefiting from that investment and change. And therefore, in terms of upskilling, raising ambitions, getting the job done. That’s where I come from in terms of my values and beliefs.”

Chris Henning gave a presentation on the City Council’s views for ‘Building a Better Nottingham.’ He said, “It is absolutely critical that we continue the path, the ambition and investment that we have in the city in order to build our way out of COVID.” Chris acknowledged that the city is facing a number of challenges including the economic shock from COVID, unemployment and the Broadmarsh. However, he said those challenges will make them more resourceful and encourage them to work even more with partners, investors and other stakeholders of the city who are able to make their plans and visions a reality. 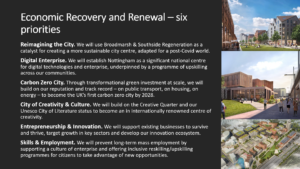 We are thrilled to have given members of Nottingham Partners the opportunity to virtually ‘meet’ Nottingham City Council’s new CEO and find out more about their plans for Nottingham’s recovery.

If you would like to find out more about becoming a member of Nottingham Partners, please view our brochure here or email Natalie.Williams@nottinghampartners.co.uk for more information.

Our next event will take place on Friday 2nd October on Zoom which will feature an update on the Economic Growth Board. The event is a session focussing on the recently created Nottingham Economic Growth Board, where it’s Chair, Nick Ebbs will tell members about the Board, its remit and its current activity. Nick is also the Vice-Chair of igloo Regeneration Ltd. Nick will be joined by Professor Kevin Shakesheff who is also a member of the Growth Board, Chair of One Nottingham and a Pro-Vice-Chancellor at the University of Nottingham. Nick and Kevin have been working together closely with the intent of mobilising the resources and reach of both organisations to support economic recovery.