How Nottingham will become ‘city to watch’ in post-Covid world

Reporter, Joseph Locker from the Nottingham Post speaks to Sajeeda Rose, the council’s new director of growth and city development.  Formerly the chief executive of D2N2, the Nottinghamshire and Derbyshire Local Enterprise Partnership, Ms Rose will take up her new role from September this year.

It is arguably one of the most challenging local authority roles in contemporary times, with the city, country and indeed the entire world reeling from the coronavirus pandemic. 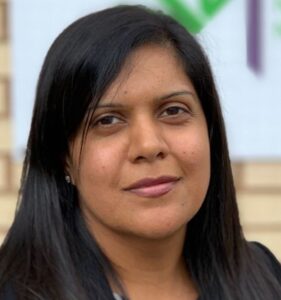 “It is absolutely a big job, exciting and daunting at the same time,” she says.

“I don’t think you can take on a job like that and expect it to not be daunting because of the size and scale of the challenge and opportunity.

“Nottingham is a fantastic city with so much to offer, but equally, coming out of Covid like many cities, thinking about its future, how it positions itself and responds to the challenges around what you do about the future of city centres, the decline and change in use on high streets, how do you create a strong city that still brings people in?

The recent failings of Nottingham City Council have been well documented, with damning audits revealing lacklustre mechanisms for scrutiny and accountability as well as a negative culture creating poor governance practices.

Millions of pounds of public money were pumped into its failing company Robin Hood Energy and, combined with coffers already thinned out through Government cuts and the cataclysmic pandemic, the impact on services, jobs and taxation has been nothing short of significant.

“I fully accept and recognise that, and I knew that when I took on the job,” Ms Rose said.

“What I would say is that Nottingham has been very open about its need for change and embracing change.

“To some extent appointing me as someone not from a local authority is again them demonstrating their commitment to bringing in new ideas and fresh ideas.

“It is important to not throw the baby out of the bath water. It is unfortunate when things go wrong but the focus should not just be on what has gone wrong, rather than celebrating things that are working well.

“So for me it is understanding where things need to change and for the better but not withstanding that celebrating things Nottingham does do very well.”

Looking ahead and into the future, Ms Rose emphasised she will not only take inspiration from some of the “great northern cities”, but also build upon Nottingham’s unique heritage and charm.

Ms Rose is already a member of the Nottingham Growth Board and has been involved in numerous pivotal projects, including leading the successful bid for the East Midlands Freeport, which has been described as a “game changer” and could bring in up to 60,000 jobs.

She spoke of her interest in Nottingham’s bid to become the country’s first carbon neutral city, as well as the potential which lies within the rubble and twisted steel of the Broadmarsh site and the newly refurbished castle.

“My plan is to build on the vision that Nottingham has set up,” she added.

“I am very aware that Nottingham has a vision for its recovery strategy, and my role will be to help realise that, build on its heritage, build on its carbon neutral future.

“I am very open to looking at how you can see where others have developed and done things well and how to you learn from that?

“How do you work with other core cities, the likes of Leeds which is one that springs to mind, even Manchester, again great Northern cities and how do you learn from their success?

“I think Nottingham is a unique city in its own right, I don’t think trying to be like another Birmingham or Manchester is for Nottingham, it is finding what works for Nottingham and recognising its uniqueness.

“It has a strong cultural hub, it has got a strong legacy around the large sciences sectors, how do you build on those? Also we have got existing great businesses with the likes of Experian and Boots already in Nottingham, how do we make sure we maintain the city that means they can meet their needs and attract talent.

Independent business owners in the city agreed, arguing the need to build on its existing history and culture.

“There are a lot empty shops that keep increasing so getting them filled is needed,” says Rhea Clements, 34, the owner of Handmade Nottingham.

“And being an independent, making commercial properties more accessible to smaller businesses will add more diversity and make the high street more interesting. We’re all sick of clones of clones.

“There is a lot of history in Nottingham and we should use that.”

Shaun Hoolan, 52, who owns vintage clothing store Wild in Hockley, added: “‘I haven’t been down to Broadmarsh in a long time, but Nottingham has always had two centres.

“That end of town is having a lot of work done, near the station. They’re trying to make another quarter which is a good thing, as is anything that brings people into the city.

“I’ve seen Derby disappear into a black hole, there is no reason for anyone to visit, there is nothing there. The difference between the two is huge, as Nottingham just gets on with stuff.

“We have a big student population and there is a lot of culture in the city. It has some of the most independent businesses in the UK which are great.

‘I don’t think it will take a great deal of work. I consider it as an equal to Manchester or Leeds.”

“I hope Nottingham will become a vibrant city that celebrates the cultural diversity that it has,” Ms Rose added.

“I think Nottingham has got huge potential. Look at the fact there has been lots of private investment. Look at the Island Quarter and how HMRC are moving in, that shows you there is confidence.

“We are the first in the country and perhaps in the world where we have a blank canvas with Broadmarsh in a post-Covid world, look at how that might work in a new way.