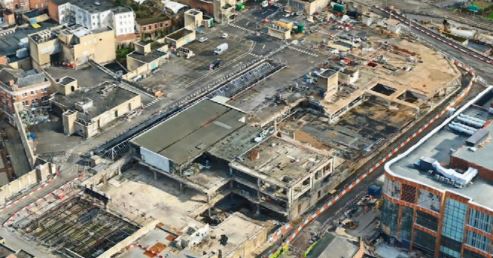 Both Stories and Heatherwick Studio will work with the Greater Broad Marsh Advisory Group to reimagine the 20 acre city centre in the heart of Nottingham’s city centre, which includes the former and now derelict Broadmarsh shopping centre.

The Advisory Group was set up in March this year to help Nottingham City Council create a new vision for the significant site and build on the ‘Big Conversation’ consultation, which saw the Council receive over 3,000 responses.

The Advisory Group identified that specific areas of expertise were needed to help recommend a creative vision for a site of this size, scale and significance and advise how Nottingham can deliver the project over the next decade.

Newly-released aerial images of the site can be accessed here.

Nottingham City Council’s Leader, Cllr David Mellen, said: “Appointing a company of such international standing and recognition clearly demonstrates the scale of our ambition for the Broad Marsh site. The fact that Thomas Heatherwick wants to be involved in the project is testament to the once-in-a generation opportunity we have here in Nottingham. Working with the Advisory Group and listening to the feedback from thousands of local people and groups, we want to create something truly different and special in the heart of this city.

“Heatherwick’s approach to urban design, focussing on positive social impact and creating places led by the needs of people, reflects our ambitions for the area and the thousands of individuals and organisations who took part in the Council’s Big Conversation about Broad Marsh, the biggest consultation we have ever undertaken. There were some fantastic ideas put forward, with green space and sustainability a key theme.

“We want to deliver a vision that is ambitious and imaginative but achievable, which first and foremost enhances the quality of life for local people but which captures the imagination of people further afield and partners who want to invest in our city.“

Thomas Heatherwick said: “We’re excited and honoured to be involved in the Broad Marsh project – and it’s inspiring that Nottingham City Council has already been talking so much to the public about what could be possible through the Big Conversation.

“When you bring together this pivotal site with the heritage of the castle and caves, alongside the existing investment in the new library and college, we think there’s an amazing chance to reimagine this part of the city and bring it alive again.

“Urban centres in this country have been failing fast through a combination of conventional high street shopping that’s been swallowed up by the online world and bland gentrification, which has eliminated local character. Added to this, the pandemic has made many people feel lonely and isolated. We need to regenerate the hearts of our cities and towns as places for us all to come together. Urban green public spaces can also play an important part, not only socially and experientially, but also by contributing something towards solving the climate crisis.

“Nottingham has the chance to lead the way, like it has done many times in its rich creative history.”

Paul Clark, co-founder and Director at Stories, who will advise on the commercials and delivery model for the site, said: “I’ve loved Nottingham since my time at the University over 20 years ago. Getting the best social, environmental and economic outcomes from the property development process is why we created Stories. We’re over the moon to be supporting the city with this pivotal project.”

Greg Nugent, former London 2012 Olympic and Paralympics Director and independent Chair of the Greater Broad Marsh Advisory Group said: “This is an incredibly ambitious move by Nottingham City Council and a serious statement of intent. Nottingham has a rich history of pioneering acts of creativity, and securing Thomas Heatherwick to help us re-vision the Broad Marsh site is one of them. Stories have worked on some of the most successful regeneration projects in the UK and will help us make the dreams for this space a commercial reality.

“Cities the world over are going to have to change and adapt in the coming years. Not just because of COVID-19 and its devastating effects, but also as a response to the impact of online shopping and to rise to the sustainability challenges we all face.”

Lilian Greenwood MP said: “It’s great for Nottingham that the city has been able to bring on board someone as well-regarded and high profile as Thomas Heatherwick, who can bring creativity and innovation to the development of a new masterplan for Broad Marsh. It’s such an important space in the city and local people feel very strongly about what they’d like to see there, as we saw in the huge response to the Big Conversation. I’m really looking forward to seeing the proposed new vision later this year.”

The development of the vision for the site along with the demolition of the western part of the shopping centre is being funded through D2N2, the Local Enterprise Partnership, via the Government’s Getting Building Fund.

Elizabeth Fagan CBE, Chair of the D2N2 Local Enterprise Partnership, said: “This is an important and bold step forward that will inspire an exciting new future for the city.  The first phase of the redevelopment of the Broadmarsh Centre will capitalise on the LEP’s previous investments – including the castle, the new library and Nottingham College’s City Hub – to enable Nottingham to attract major new investment and support its future recovery and long-term sustainable growth.”