Construction work on the new Broadmarsh car park, bus station and Central Library is around two weeks ahead of schedule despite weather-related delays.

It is estimated about one week has been lost to high winds, with storms Ciara and Dennis slowing down the project slightly.

But weather delays are factored into the timeframe from the start, construction bosses said today, and even with the storms, progress is going faster than planned.

It comes as the building was officially ‘topped out’ – a ceremony to mark the building reaching its highest point. 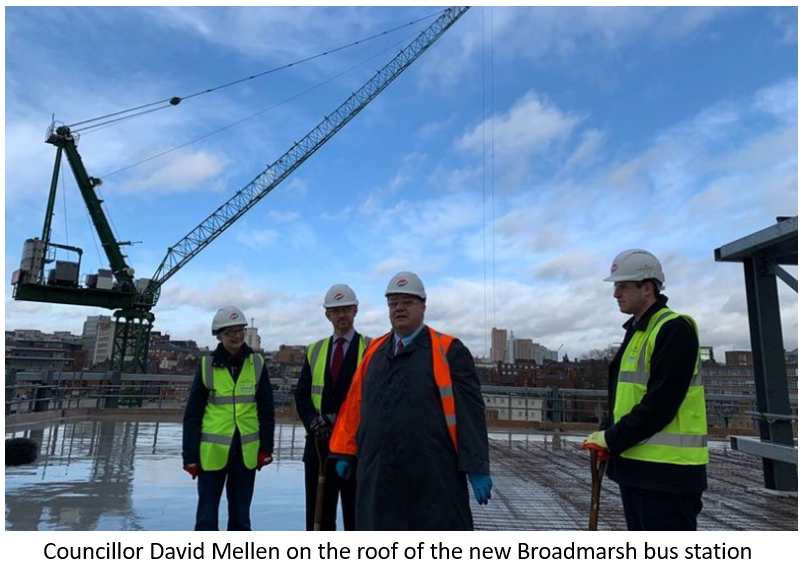 The terracotta-coloured facade of the building will be installed in the coming weeks, with windows coming shortly afterwards.

Already, 62,000 man hours have been spent on the construction of the site, with 70 percent of workers coming from the local area.

Around 3.5 kilometres of pile foundations have been put in and 2,000 tonnes of steel have been used, with more to come.

Once complete, it will have 1,150 car parking spaces, a new children’s library, a bus and coach station and retail units.

It’s part of a £250 million regeneration of the Broadmarsh area, which includes pedestrianising Collin Street and redeveloping the intu Broadmarsh shopping centre.

Councillor David Mellen is the leader of Nottingham City Council, and represents the Dales ward for Labour.

He symbolically placed a spade-full of concrete at the highest point on the building on the 18 February before joking that he wouldn’t be parking on the spot he had built.

He said the building was a symbolic one for the city, and while he understood why people had been cynical about the long-awaited construction project ever starting, he was thrilled to see it become a reality.

He said: “This time last year this site was empty, work had only just begun on intu Broadmarsh and only a couple of bits of steel were out of the ground at the City Hub.

“Now there is major demolition work at intu Broadmarsh, the College is scheduled to open in September and like many in Nottingham I’ve been pleasantly surprised at the speed at which this development has emerged from the ground.

“With the scale of this new building, people are really starting to get a sense of the ambitions we have for Nottingham.

“Providing a new car park and bus station will bring more people to this exciting new area, especially families who will have leisure facilities like bowling and the cinema at intu Broadmarsh and the best children’s library in the country at the new Central Library.

“Our redevelopment of this area is giving confidence to private investors too, with HMRC’s new tax offices at Unity Square progressing at pace and with ground having been broken on the Island Site last week.

“It’s an exciting time for Nottingham – I know some thought Broadmarsh might never happen, but it’s become a reality now as the area changes before people’s eyes.”

The building is currently scheduled to open next year, and councillor Mellen said if it was ready to open early then they would try to open it as soon as possible.