There was a lot of speculation around MIPIM – a four-day real estate exhibition, conference and networking event hosted in Cannes – this year. Who was going and was it worth it? We spoke to Liz Cartwright, managing director at Nottingham-based marketing, PR, and digital agency Cartwright Communications, to find out what it was really like. 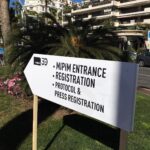 “‘Who is going’ was the most common question from everyone we spoke to ahead of the event. Most local authorities from across the UK attend MIPIM every year, selling their opportunities on the international stage. However, many cities and regions – including many MIPIM stalwarts – decided not to attend this year.

“The Midlands (both east and west) normally has its own Midlands Engine pavilion where there are panel events, talks, seminars and launches of major schemes and initiatives. This year the stand was taken by Team Egypt.

“We were all therefore wondering what it was going to be like, as for some there is no MIPIM without local authorities – and they stayed away. But for others, it was business as usual and out came the business cards and QR codes and off they went.

“This was particularly true of Team Nottingham. In the absence of Nottingham City Council and Invest in Nottingham, it was represented by 13 private sector organisations, keen to ensure that the city was still recognised. These included:

“As a team we hosted two private lunches and the – now famous – Nottingham Drinks event at Morrisons, an event that normally attracts 350 people. This year, the attendee numbers were around the same – which was really pleasing given there were fewer people.

“Reed Midem, the organisation that runs MIPIM, announced they had 20,000+ people at this year’s event – but I would say there were fewer. Aside from attendee numbers, there were also fewer large dinners, big-bang moments and much less in terms of launches.

“However, overall attendees were really positive about MIPIM 2002. Our clients and colleagues told us they had good weeks and less frenetic diaries, meaning they could have more meaningful conversations – and generate fantastic leads. Indeed, we as an agency picked up lots of opportunity. But that’s MIPIM for you.”